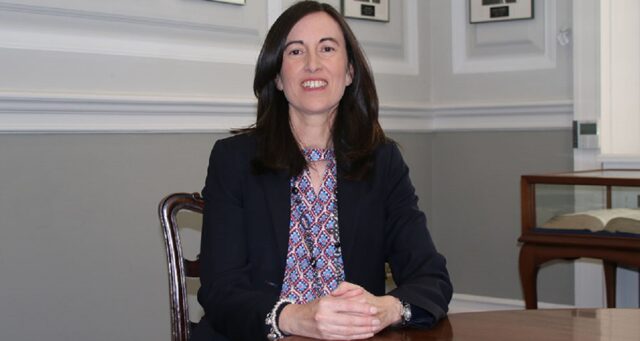 How should central government departments seek to keep on top of the opportunities and challenges created by the rapidly growing world of fintech? It’s a question being wrestled with by administrations worldwide as digitisation of government services – and life more broadly – accelerates.

Karen Cullen, a civil servant for more than two decades, has a leadership role on this in Ireland – one of the European Union’s (EU) smaller member states by population size, but which is viewed as punching significantly above its weight when it comes to the strength of its financial services sector (and influence on European policymaking).

Cullen, who is head of international financial services in the Department of Finance’s risk and compliance unit, assumed the additional duty of heading the department’s fintech steering group earlier this year.

Plans for the group were among 16 new measures announced in February in the ‘Ireland for Finance Action Plan 2021’, an iteration of the government’s landmark ‘Ireland for Finance’ strategy presented in April 2019. The latter – a cross-government strategy for the country’s international financial services sector to 2025 – serves as the lodestar document, weighing in at 76 pages (and containing 89 mentions of fintech, including a proposed ‘Fintech Foresight Group’ – set up four months later with lobby group Banking & Payments Federation Ireland in the chair).

‘Fintech as an opportunity’

The Department of Finance, where John Hogan was promoted to secretary-general three months ago, houses just over 300 civil servants, making it one of Ireland’s smaller government departments. Cullen, who began her career as a solicitor, is among the longest-serving staff, having worked there for 23 years.

“We’ve been working on ‘fintech as an opportunity’ for a number of years,” says Cullen, by videocall with Global Government Fintech. She is also secretary to a Department for Finance-led public sector high-level implementation committee for Ireland for Finance (this is chaired by a government minister with cabinet responsibility, meets quarterly and exists to ensure the public and private sector are singing from the same hymnsheet).

So, where does the new fintech steering group fit in to her own, the department’s and government’s agenda? “I felt last autumn that there was a need for a group within the department made up of senior managers across sub-sectors to look at fintech – across banking and payments, AML [anti-money laundering], markets and investments, insurance and so on, and also a crypto expert, too,” she explains.

The group, whose membership comprises about 12 heads of sub-units, meets monthly or sometimes more frequently.

Cullen herself reports to the assistant secretary of the department’s financial services division, Michael McGrath, while relevant ministers are finance minister Paschal Donohoe and minister for financial services and insurance Seán Fleming. It was the latter who took the lead in February in launching the Action Plan 2021, which also includes the delivery of a new Masters programme in fintech innovation.

The fintech group has ‘four Cs’ as its priorities: to co-ordinate; collaborate; contribute; and communicate. Cullen explains them one by one.

“We co-ordinate on policy proposals across the sector where fintech impacts within the department but also, crucially, across government,” she says. The most important other departments here are the Department of Education, as well as Enterprise Ireland and IDA Ireland.

Her pre-existing role as secretary to the public sector committee is helpful. “I have a ready-made infrastructure to engage across government on issues to do with international financial services,” she says.

The second ‘c’ sees the group “collaborating with industry and key stakeholders” while the third ‘c’ – contributing – is primarily meant in the context of EU law (Ireland joined the EU in 1973). “For the past few months we have been very heavily engaged in the third ‘c’, which is to significantly contribute to European policy on digital finance,” she says.

Among the inevitable priorities here are ‘MiCA’ (the Regulation on Markets in Crypto Assets’) and ‘DORA’ (Digital Operational Resilience Act), which were proposed last autumn, as well as the lower-profile regulation on a pilot regime for market infrastructures based on distributed ledger technology (DLT).

In respect of her fourth ‘c’, communication, Cullen says the fintech group plans to “assist in the mapping” of state support for fintech companies across government and “communicate the role of other actors”, such as the Central Bank of Ireland and its Innovation Hub (the closest thing Ireland has to the fintech regulatory sandboxes that are becoming increasingly widespread across the globe). The aim is to produce a “one-stop-shop” informational resource.

‘Fintech fits easily with the ecosystem in Ireland’

Ultimately, it’s easy to add a fifth ‘c’ to the fintech group’s remit (which would really be a natural evolution of the fourth ‘c’) – championing. Ireland’s authorities, and financial services lobby groups, are naturally keen to expound on the country’s relative strength in financial services, with fintech an important part of that.

“Fintech fits easily with the ecosystem in Ireland – we have the tech companies through FDI [foreign direct investment], and a lot of homegrown companies, Stripe being the best known,” says Cullen.

The story of Ireland’s financial services growth is well told. On the fintech-leaning side, US-headquartered bank Citi set up an Innovation Lab in capital city Dublin in 2009, with a veritable who’s who of leading global financial services brands, from BNP Paribas to Fidelity, having followed suit with similar initiatives. Mastercard announced just over 18 months ago that Dublin was to become its new ‘Tech Hub for Europe’ with a new ‘campus’-style site in Leopardstown, south of the capital.

Britain’s recent EU exit was – and is – unwanted (and the ramifications continue to reverberate) but it has nonetheless led to further job relocation and/or job creation in financial services across Ireland. Reluctantly capitalising on Brexit – like in other EU financial capitals – is, naturally, a priority.

All these inward investments have not happened by accident – R&D-related tax breaks have been significant while Enterprise Ireland supports indigenous fintech.

“The level of spending by international financial services firms on technology in Ireland, relative to the size of our economy, gives us an advantage when it comes to winning new private-sector investment, but also sets the pace at which policymakers have to respond at,” says Cullen. “That, in turn, shapes the scale and scope of the work of the fintech steering group.”

Like other governments – for example, the UK, where HMRC has procured a fintech company to embed open banking into its operations and the Crown Commercial Service is looking to ‘bring fintech to the fore’ as part of a newly created framework of ‘debt resolution’ providers – Ireland’s authorities are also exploring how fintech solutions can help improve the state’s own operations and services.

As an example, Cullen refers to an Irish government-organised ‘hackathon’ held in 2019 exploring four public-sector problems that could be solved using DLT (blockchain). The so-called ‘Blockathon’ was organised by the Department of Public Expenditure and Reform, working with the Department of Finance.

“The event was very successful in pulling the ecosystem together, plus the winners got to present to the board of our Central Statistics Office. Many of the follow-ups were planned as physical events, which were postponed because of Covid. But we expect to see more of this type of activity picking back up as meet-ups like this are possible once more,” she says.

She references Enterprise Ireland’s financial backing for fintechs. “By deal number, Enterprise Ireland is the largest VC [venture capital] house in Europe and I would say that about 70 per cent of the firms they fund in financial services are fintech, and a lot would be paytech. They, in turn, compete for government business,” she says.

“The primary focus for fintech right now is growing the number of firms that are capable of competing in global markets,” she continues. “But discussions are taking place around including more of these firms in delivering government services to people and it is likely that will be a greater feature in the next phase of development.”

She makes an interesting aside about the extent to which emerging fintech (or its sister ‘techs’) would necessarily see Ireland’s domestic market as a priority. “We are a small market and ironically a lot would still look to the UK as a bigger test market,” she reflects.

‘Fintech is a resilient trend to invest in’

Ireland’s ‘Economic Recovery Plan’, published in June, is a further government strategy document that – inevitably given the trends accelerated by the Covid-19 pandemic – is heavy on its emphasis on digital investment (with 97 mentions of ‘digital’ across 32 pages as it describes the ‘digital transformation of government’). There is emphasis on the importance of digital skills across society.

“The government has identified fintech as a resilient trend to invest in,” says Cullen.

“The amount of money being spent on fintech within the education system is going to grow as colleges look to wider digitalisation and giving people new skills,” she continues. “My personal view is you’ll see a lot more of that around AML and retail as people move from the high street to working for the likes of Stripe, Shopify, PayPal, giving people skills as they migrate from one to the other – that’s a big part of government support and fintech is a big part of that.”

For the fintech group, this means advising on consumer education programmes by working with colleagues in the Department of Enterprise, Trade and Employment.

Beyond domestic priorities, she is looking forward to resuming international travel when Covid restrictions hopefully diminish. Brussels is inevitably very important, as is London (still).

“We generally travel to the Asian Financial Forum in January, and we are looking at some of the fintech weeks in Asia,” she says. “North America is also important. It’s about engaging with both colleagues in the public sector and also the commercial sector.”

What role for fintech in international trade? Chris Southworth and Nick Davies interview