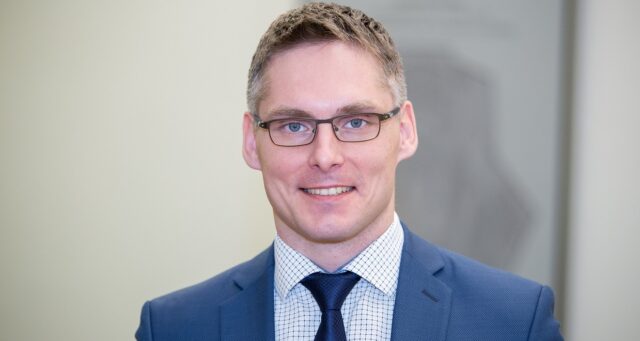 Estonia boasts a well-forged reputation both as an e-government pioneer and for punching above its weight in the European Union (EU). So recent news that its central bank has stepped up to inform European Central Bank (ECB) research into a potential ‘digital euro’ came as no surprise. Tallinn is a logical harbour in which to dock for projects that could benefit from techie know-how.

Rainer Olt, payment and settlement systems department head at Eesti Pank, is leading a team investigating the suitability of Estonia’s e-government core technology for operating a CBDC – an increasingly hot topic for central bankers across the globe. From China’s journey towards a digital yuan, to the Bahamas’ recent launch of its evocatively named ‘sand dollar’, it has seemed like a global race to launch a CBDC.

Curious but non-committal is most central bankers’ stance, including for the ECB, which wants to decide by mid-2021 whether to give the green light to more in-depth explorations. Speaking to Global Government Fintech by videocall from the Estonian capital, Olt – who knows the ECB very well having worked at its Frankfurt HQ in two different stints – treads a similar line, at least in the short term.

“I don’t think it’s a race but it seems we are steadily moving towards one [digital euro],” he reflects. “But there’s no immediate need, I would say. Even if we are using less cash, people are using cards or mobile payments, which work well and are secure. I don’t anticipate that cash will be redundant any time soon or at all.”

“CBDC can help supporting digitalisation of business processes and, more broadly, the economy,” he explains. “There are many technology-related questions as to scalability and other aspects that require a deep dive first.”

‘Exploring the limits of technology’

Estonia, whose population of 1.3 million makes it one of the least populous member states of the 27-nation EU, adopted the euro in 2011. This meant that Eesti Pank joined the Eurosystem, which comprises the ECB and central banks of euro countries (at present, 19 EU states).

“Eesti Pank, as a small central bank, chooses carefully which Eurosystem development projects we are able to contribute to meaningfully,” Olt said last month, when it was announced that Tallinn would be giving Frankfurt a helping hand.

There are different types of CBDC and central banks across the globe are focusing on different research avenues: Australia’s central bank, for example, is among those exploring the wholesale form, which would be for interbank settlements. Eesti Pank’s investigations sit on the retail (public) side. “We are focusing on exploring the limits of technology for servicing the needs of retail CBDC,” says Olt, who – usefully – spent more than six years in retail banking before first joining Eesti Pank in 2011.

Olt and colleagues are specifically exploring the suitability of the KSI Blockchain (which stands for ‘Keyless Signatures Infrastructure’), created in Estonia 13 years ago, for supporting a central bank’s digital money infrastructure. His team is working alongside two tech companies: Guardtime, the government’s long-term blockchain partner, and London-headquartered The SW7 Group.

Eesti Pank is looking at the “scalability of transactions per second, speed of settlement and privacy,” Olt explains. “Benchmarking is against existing retail instant payment systems and DLT [distributed ledger technology]-/blockchain-based systems that have identified several bottlenecks related to scalability for servicing the volume of transactions of retail CBDC. Our initial tests show easily 10,000 transactions per second with final settlement – this is a very good starting point.”

The bank’s research is initially planned to run for about two years. Olt says that testing solutions that enable payments in retail stores and between individuals is “tentative” due to time constraints laid down by the ECB.

Within the Eurosystem, Banque de France has spent the bulk of this year exploring the wholesale side of CBDC. Blockchain is less of a focus here as the Eurosystem has its TARGET Instant Payment Settlement (TIPS) market infrastructure service, launched two years ago. That said, nothing is yet decided.

It is 20 years since Estonia’s Parliament approved its Digital Signature Act (DSA), and eID and e-Signatures are now widely accepted in the country – something that ties in to the CBDC project.

“For us the most interesting aspect to test is how to connect Estonia’s national eID/e-Signature solution to CBDC while ensuring privacy,” says Olt. “This does not mean anonymous CBDC transactions, but ensuring to individuals that no one is looking into their transactions without them knowing.”

“It’s important to say that central banks do not have a business interest to look into this data,” he adds. “Behind this is the idea that ideally a person should be able to use CBDC with his or her national digital identity, which ensures privacy for e-government services already.”

‘Payments needed to be faster throughout SEPA’

Estonia’s CBDC study is far from the first case of the country pushing to the front of Europe’s payments peloton.

Olt winds the clock back to what he calls “the start – the SEPA migration”, a reference to the Single Euro Payments Area – the EU initiative to simplify euro-denominated bank transfers. “Before that payments in Estonia were [already] faster than other parts of Europe,” he says. “After the SEPA migration in 2014, the ECB and other Eurosystem central banks, including Eesti Pank, started to discuss that payments needed to be faster throughout SEPA, which resulted in defining SEPA ‘instant payments’ – payments that can be made between banks in a maximum of 10 seconds and 24-7-365.”

“In the background, central banks initiated the upgrade of SEPA into a faster, instant payments area where it’s possible to build European solutions that can compete with global players,” he says. “In our catalyst role we facilitated change and development at the European level via the Euro Retail Payments Board [which is chaired by the ECB].”

Eesti Pank chairs the Estonian Retail Payments Forum, which last year signed off a roadmap to support the development and uptake of payment solutions. This aims to build on – at a broad level – the EU’s high-profile second payment services directive (PSD2), as well as, more specifically, what are known as SEPA Instant Credit Transfers.

“Estonia has been the frontrunner of adoption of SEPA instant payments,” says Olt. “Rapid growth started at the beginning of 2019 and this year we have seen a fast increase – now we can say that instant payments are the ‘new normal’ for Estonians in almost all channels available.“

So, what does this mean day-to-day for Estonian citizens? “Payment initiation directly from your smartphone phonebook based on a mobile number is finding its way into Estonians’ payments habits,” explains Olt. “And, in Estonia, digital commerce is supported by ‘Payment Initiation Services’, as encouraged by PSD2, enabling consumers to initiate an instant payment from his/her bank account via another bank used by the e-merchant.”

But there’s a load of priorities still to tackle. “We are in the process of launching a working group [that will be co-chaired by Eesti Pank and the Ministry of Economic Affairs and Communications] under the Estonian Retail Payments Forum aimed at putting together a strategy and action plan for digitalising the payments landscape further, with a focus on small- and medium-sized enterprises [SMEs] and enabling better opportunities for switching to digital sales platforms, given the ongoing pandemic,” says Olt.

He points out that recent research has shown how many Estonian SMEs are yet to be aware of – let alone embrace – digital solutions such as ‘request-to-pay’ and e-invoicing or e-receipts. The latter, Olt says, “do not only cover the pre- and post- stages of payments, but constitute important building blocks for a real-time economy”.

“The retail payments landscape expects the adoption of instant request-to-pay [e-request for payment] solutions – a broader uptake of e-invoicing and e-receipts to complete the digital payment chain,” he outlines.

Automatic (payments) for the people

Given that we are talking about Estonia, there are inevitably important crossovers between the work undertaken by Olt’s team and public service delivery.

“From a government perspective what we have started discussing in the context of the roadmap towards instant payment solutions, is how to transition all government tax and other [government] requests into a digital format or a more automatic format. Currently citizens receive emails, then need to initiate a separate payment order. We’d like to have it more automatic – that’s the next objective for government,” Olt says.

Instant payment of land tax (an annual fee for owning land or real-estate) is already live, having been introduced about a year ago. “It’s now being collected by e-invoicing – citizens can pay it instantly,” Olt explains. “It’s being rolled out to facilitate a smoother process and to improve the rate of paid taxes. This could be applied more broadly.”

Other state services in line for e-invoicing or request-to-pay include the tax levied when buying property, a car or indeed getting married. State fines, such as speeding tickets, are also part of the picture.

Estonia’s eID and e-Signatures systems aren’t standing still either. Olt says the pandemic has accelerated their rollout into further elements of citizens’ interactions with the authorities.

“Before the pandemic citizens needed to go to a notary for a real-estate purchase but nowadays even notaries support remote solutions,” Olt explains. “You can use a video broadcast for face-to-face identification in combination with your eID for remote identification and sign off with an e-signature, which is considered the same as a ‘wet’ signature. Estonia is moving more and more towards fully remote business – and that’s the same with governmental services.”

As with, for example, the SMEs who are yet to jump on board, there are other challenges. Declining cash use brings concerns about, for financial inclusion – as is the case in most countries. Sweden has passed a law to maintain cash access, and the UK is planning to do so.

“As a central bank we are, of course, looking into declining cash use,” says Olt. “A few years ago it was a really lively debate – banks were pulling out of rural areas, and ATMs were declining. As a solution, which is appreciated by people, is a cashback service that is offered in different retail chains across Estonia, covering the rural areas really nicely. It’s possible to withdraw or deposit cash [in retailers].”

Tapping into the country’s ‘brightest minds’

Eesti Bank is also involved with an initiative that seeks to ensure the country maintains its momentum as a digital governance innovator.

“Eesti Pank’s deputy governor is chairing a roundtable series on financial innovation, which aims at bringing together our [Estonia’s] brightest minds to discuss what fintech, regtech and other innovations we can do, and and promote at domestic or pan-European level,” says Olt.

The two gatherings so far have each attracted about 20 participants (the third is likely to take place in the spring) and have already proved useful – indeed, Olt says, they generated the idea of starting the CBDC research. This brings us back to where we started Global Government Fintech’s interview and his insight into the project’s direction of travel.

“Scalability, a high level of privacy, transparent auditability or traceability, and eID – these are elements to bring into the CBDC discussion around technology choices,” he says. “There are lots of technology solutions to either identify fraud or money-laundering patterns so that’s what we need to look into. Today, the bulk of solutions focus on individual banks – we need to explore ways how to do this across the banks and payment systems.”

But there is a broader objective to Eesti Pank’s financial innovation series. “The key underlying point is to identify what the brightest minds can come up with to make the payments landscape more secure, smoother and more efficient at the country level, and see where we can help at a European level,” he says.